The History of American Metro

1975-2005
Here is the store front at 2145 University Ave and the meager staging area. It’s easy to see why we would need more space if we wanted to continue doing large events. 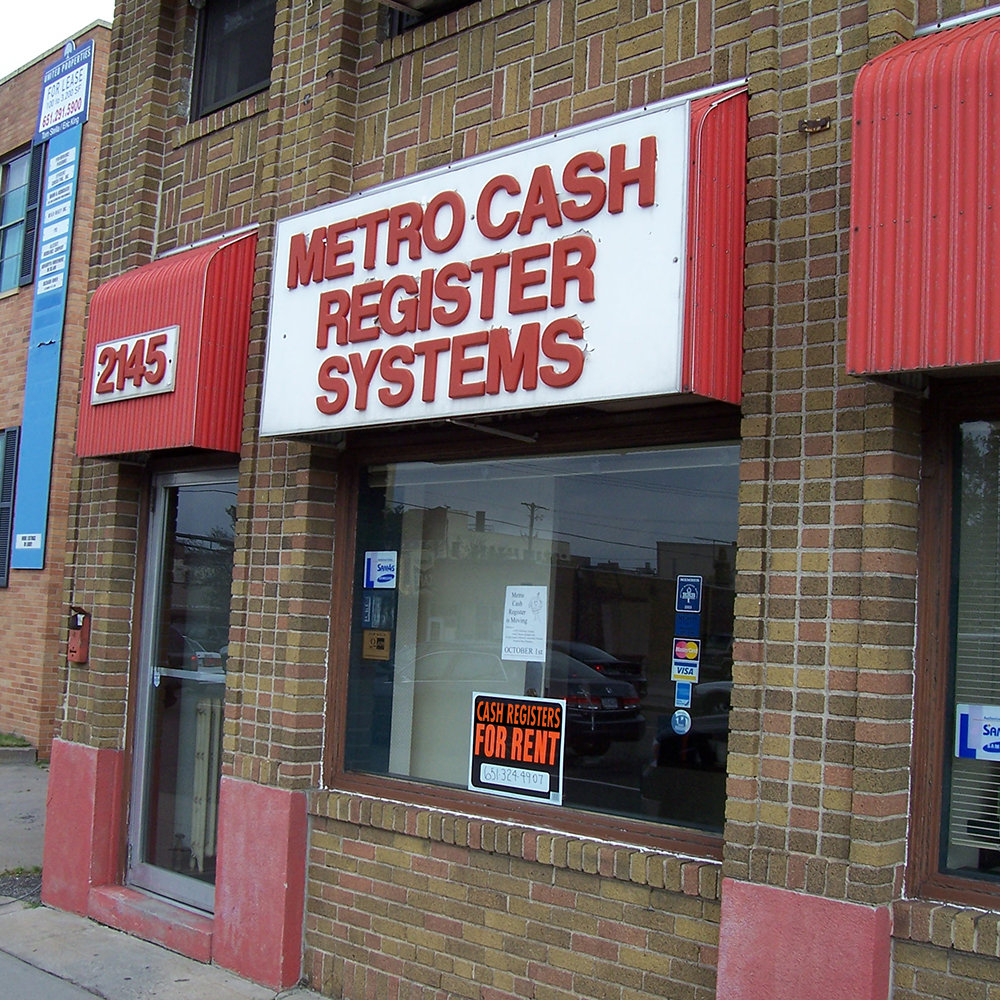 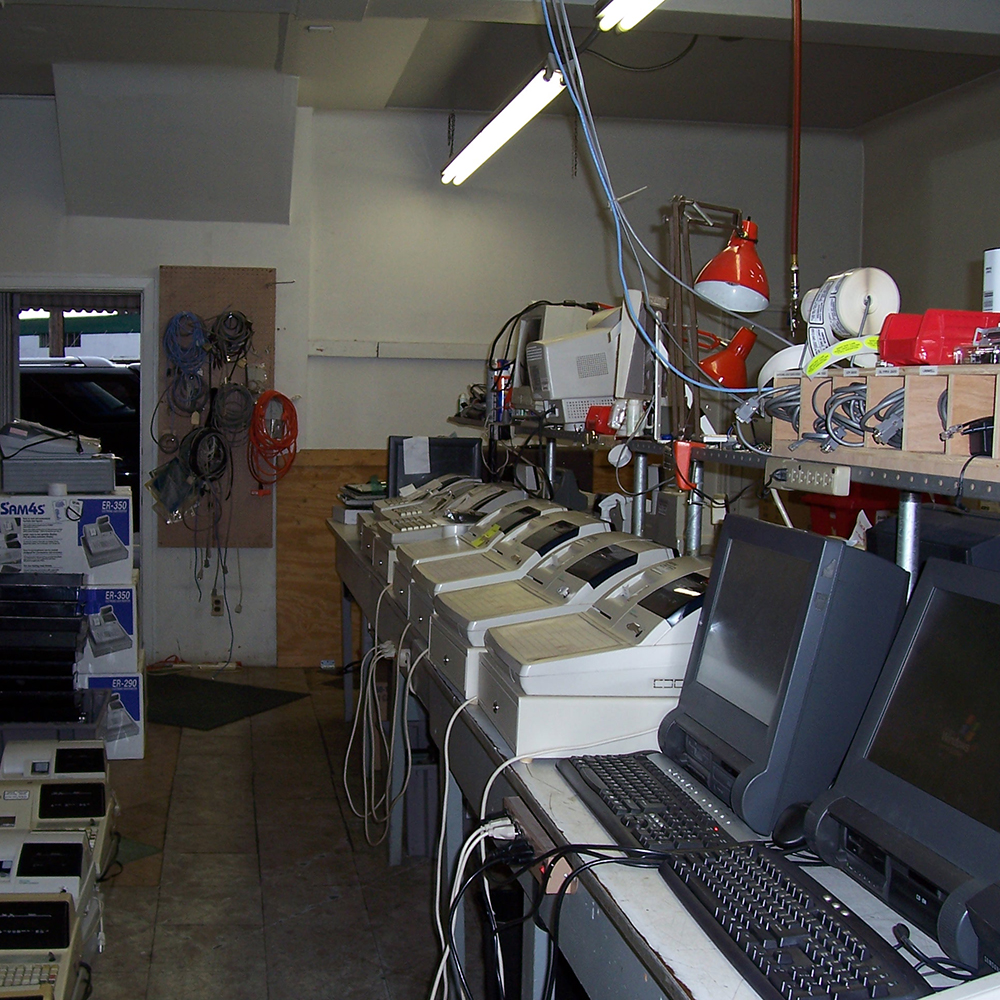 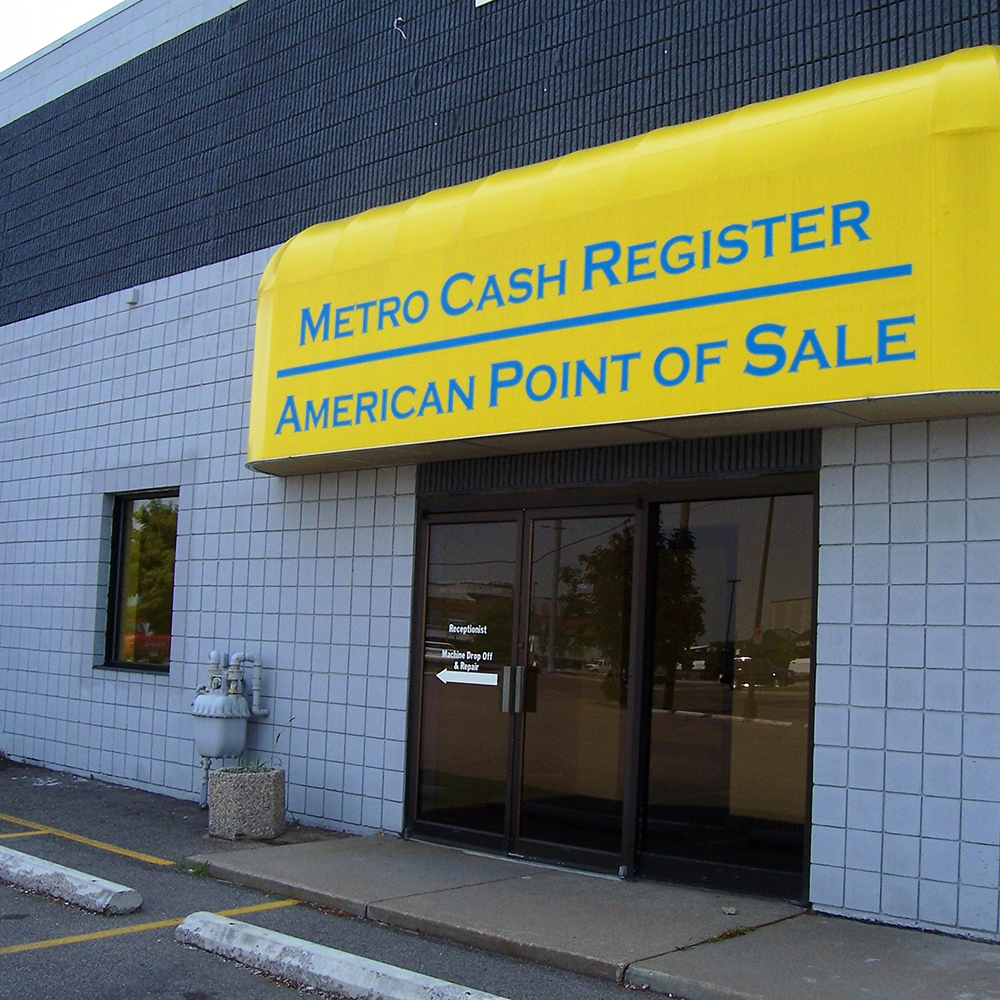 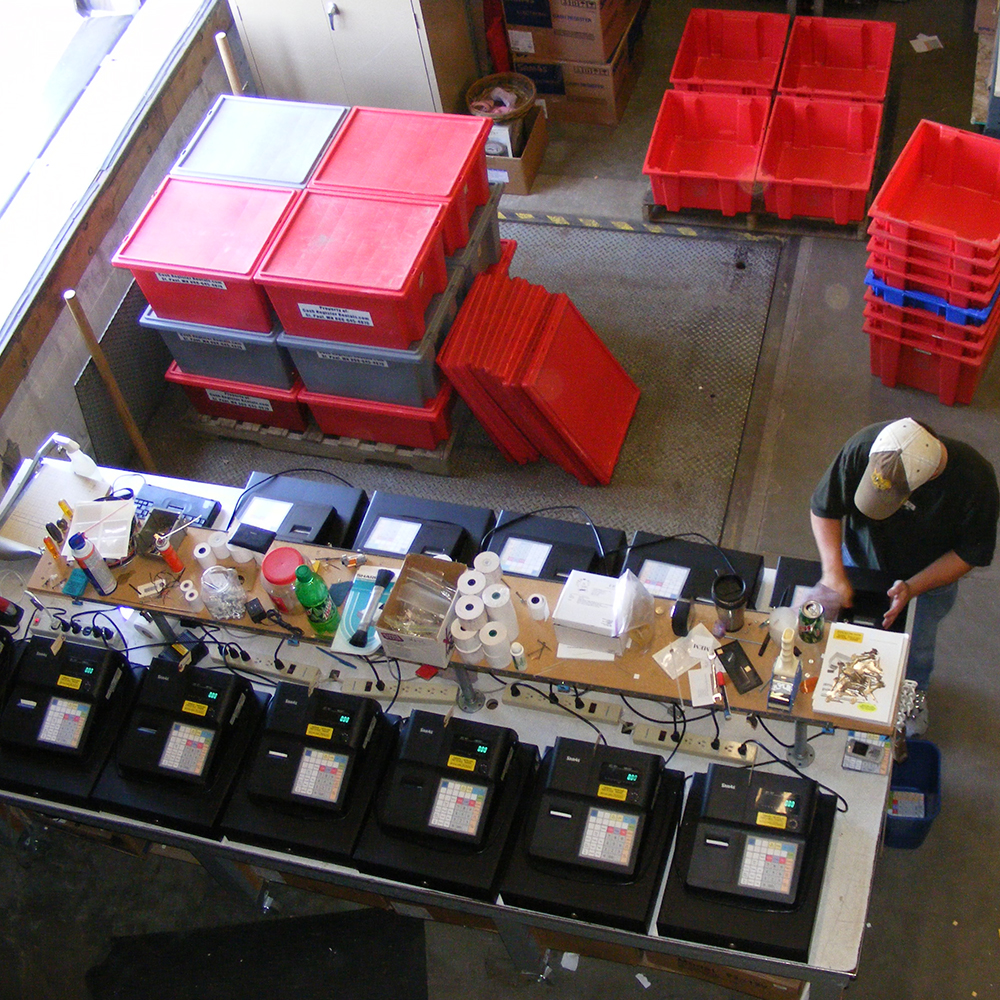 The Move to Shoreview

2011-Present
Now located at 609 W. County Rd E, we are looking at a long term home. With a dedicated show room and plenty of space for setting up large events. 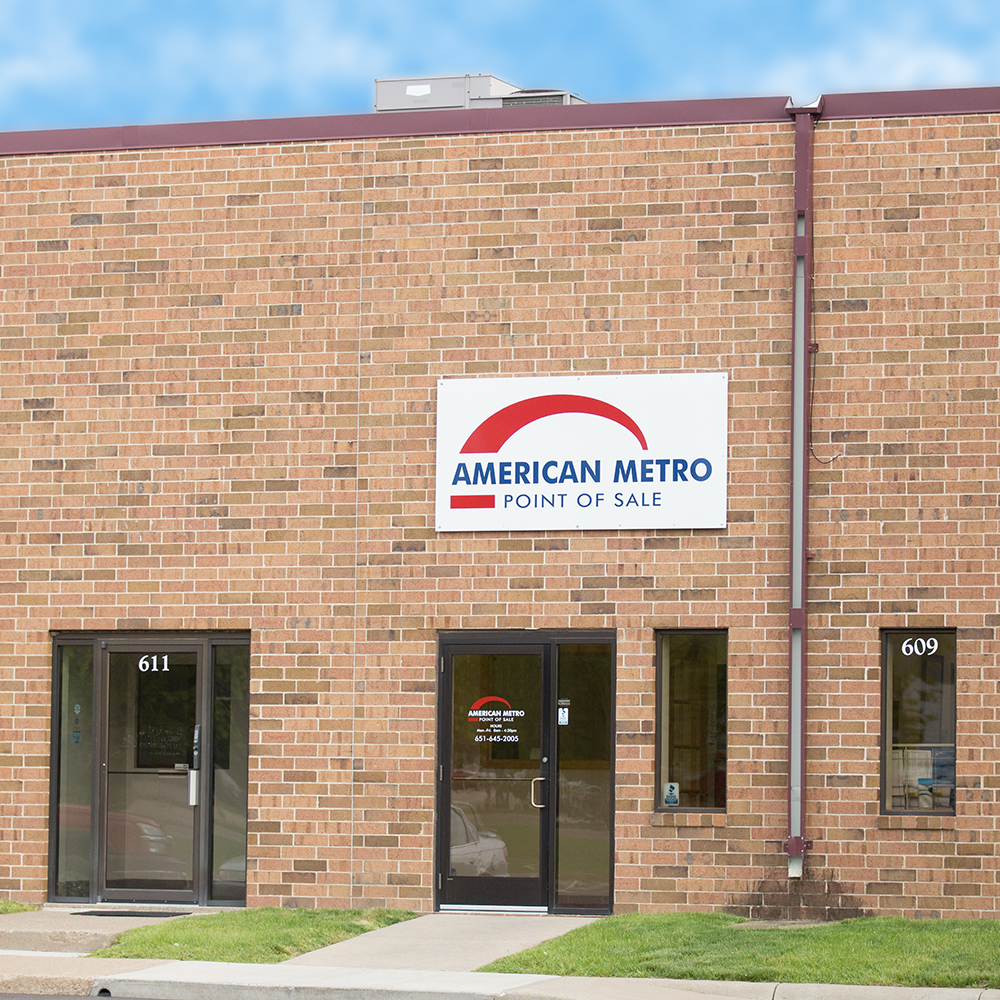 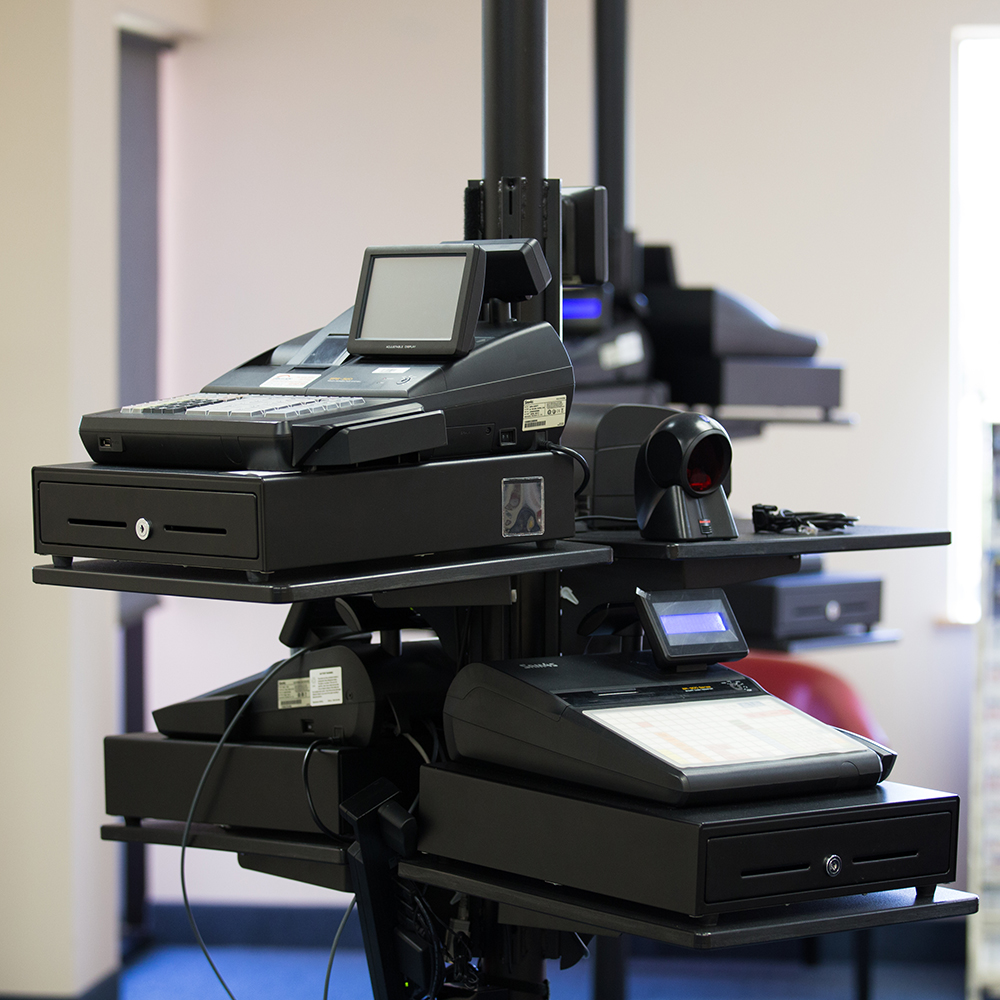 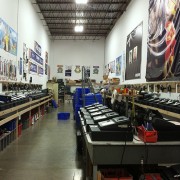 American Metro was founded in 1974 under the name Metro Cash Register. Originally located at 2145 University Avenue in St. Paul, MN, our goal was to provide cash registers to local merchants in the twin cities and surrounding areas. When Metro Cash Register began, the most advanced cash register of the day was made of steel and weighed over 200 pounds. High Tech? Absolutely. The inner workings of these machines are simply amazing. With thousands of gears, levers, shafts and pulls all working together in perfect orchestration, it had to have been developed by teams of mechanical geniuses.

By the late 80’s, we saw that the electronic cash register had a new family member on the way. The Point of Sale terminal. Retailers of all types began wanting greater control of their inventory, customer tracking, accounting functions and many features beyond the scope of the simple ECR. In 1984, Metro Cash Register installed its very first Point of Sale computer system. With 10 years of experience and hundreds of installations, we were perfectly poised to embrace this exciting new technology. We could not have been more wrong. It was, without question, a complete and utter failure. Being an optimist however, I always look for the silver lining. I’ve been looking for 31 years since that experience, and I still haven’t been able to put my finger on that one. The next one was 10 times better than the first and the one after that was twice as good as the second one. Shortly thereafter, we really did get good at it.

Coincidentally, during these early transition years from the ECR to the POS technology, another very interesting thing happened. Apparently we were not the only cash register company in America experiencing growing pains. Easily a quarter of the companies like ours simply went out of business. There were also an onslaught of “computer companies” getting into the point of sale business. Their average time in business was about 18 months. We persisted, learned, and worked very hard to once again become leaders in our industry. It was in 1989 that we added the name American Point of Sale to the masthead. With the traditional cash register entering it’s golden years and POS technology picking up speed, we wanted our name to reflect the new standard. Not wanting to leave behind our extremely loyal existing customers, we also wanted to hold on to our roots. American Point of Sale and Metro Cash Register simply became American Metro.

Our next milestone occurred in 1990. The Riverfest committee approached us in February. This was a music festival that took place on an island in the Mississippi, right in the heart of St. Paul. They told us they wanted to rent 40 cash registers to handle all of their concession sales. Well, they might as well asked us to raise the Titanic and float it back up the river. The thought of purchasing 40 registers at the same time seemed like the biggest investment imaginable. We were sure this is what JP Morgan felt like when he bought and formed US Steel. We bought the registers, rented them to Riverfest and they worked perfectly. Less than a year later we were contracted to rent 110 registers to the US Open golf championship. Our event rental business was born, burped and off and running.

As both our business and inventory grew, we made another significant change. With the sudden need for a place to store, program and ship all this rental equipment, we decided to move. We packed up and moved a few blocks down the road into a space with more room than we ever thought we would need. The new building at 1955 University Ave had plenty of office space, warehouse shelving and a prep area. Perhaps the most convenient feature was the loading dock. All these things enabled us to increase our efficiency and continue to offer the best service and prices to our customers.

Over the next 2 decades we took on more and rental events. Lots of PGA golf, music and food festivals, warehouse sales, major sporting events; anywhere a lot of people come together and want to buy food or merchandise, we were called on. Last year alone, we very nearly did 300 events. We added one major customer during an already crazy, busy time and bought 400 more rental units and didn’t think much of it. What a difference a few years makes.

As business has grown over the years, so has staff and resources. In an effort to maintain our high customer service standards, we have looked to those with the most experience in the industry. With that in mind, we began to acquire other point of sale companies in the area. Our first merger was with Guarantee cash register. This important first step brought on a former colleague of one of the founders as well as experience in the Sharp brand of cash registers. The second business we looked at was Anchor Data. At the time, they were known for providing point of sale support for Panasonic cash registers and a string of Arby’s franchises. American Metro took over Anchor Data in 1995, adding Arby’s as a customer and Steve Granning as an employee. Both of which are still with us. In the early 2000’s, we made several more purchases, including I&C Cash Register in 2000 and Pierce Cash Register in 2001. Upon the passing of the owner of Gopher Cash Register in 2004, we bought that company as well. As a Sharp dealer with a large customer base, we wanted to make sure those clients continued to receive quality point of sale support.

Our most recent acquisition was made in 2015. CRS is a point of sale importer and wholesaler that has been around since 1927. Another company local to the Twin Cities, CRS is the primary distributor of Sam4s brand point of sale equipment for the U.S. They also had a local retail presence, selling directly to businesses in the area. When it was revealed that CRS wanted to sell off their retail division to focus on distribution and product development, we saw a golden opportunity. We purchased the local sales department, their equipment and brought on 4 employees. We added a sales representative, a service technician, a programmer and a support person.

Along the way, we had more and more customers ask us for the ability to accept credit cards on their registers and POS terminals. After partnering with a merchant provider for a couple years, we decided it was time to form American Metro Payment systems. On December 7th, a day that now has dual meaning for us, we opened the door on this new service organization. Almost overnight, we had customers wanting us to help them streamline their credit and debit acceptance. Dealing with the banks and credit card companies directly was often a frustrating experience for customers. We offered to do all the leg work in setting up merchant accounts and walking customers through filling out the necessary forms.  In this very competitive industry, customer service is by far the greatest differentiator; and ours is as good as it gets.

Continuing our pursuit on providing valuable services, we piloted a program that linked integrated wireless credit card processing equipment to the web. We called it an m-Box. Sales data entered on a standard electronic cash register could now be collected and viewed on an online portal. This was a perfect fit for our rental customers, who would regularly have different staff at the register from those who oversaw the entire operation. What started with 6 of these devices has grown into nearly 350 in our rental fleet.

The additional credit card devices coupled with an ever expanding inventory caused us to once again outgrow our space. This time, we relocated to Shoreview, MN, about 15 minutes north of our previous location. Now situated at 609 West County Road E and recently taking over the adjoining space, we now have enough room to stage, prepare and test even the largest events in a single step.

The iPad/Tablet technology is known in our industry as “The Tsunami”. It didn’t start slow. There wasn’t a period where it built up steam and then shifted into high gear. As soon as it hit the market, the switch turned on and became the brightest light in the room overnight. What was once made of steel, weighed 200 pounds, has been replaced by plastic and glass, weighing in at exactly 1.05 pounds and almost unlimited calculations. Today, the standard iPad performs up to 1.65 Billion mathematical operations per second and increases with every iteration. Compared to the registers of 1970, those machines maxed out at 14 manually entered, mechanically enhanced calculations a minute. You can hold 1 point of sale terminal in your hand or 32 iPads. Bob Dylan said it best, “The times, they are a changing”.

We have adapted to the change as well. The package is smaller, but the need is still there. Customers still have a desire to find a point of sale system, or in this case, app, that is easy to use. Something they don’t have to spend hours programming and configuring. And they need the tablet with specific PoS hardware to go with it, like stands, cash drawers, printers and scanners. Whatever the point of sale requirements, we will be there to support it.

That brings us up to today. As you can see by our profile page, we’re made up of family and those that could just as easily be family. We love our industry, we’re extremely grateful for customers that have been friends for decades, and we can’t wait to see what the next chapter has in store.

American Metro was founded in 1974. If that information isn’t fun enough, here are some other bits of information from that time.

The biggest hits include:
The Sting
The Exorcist
Blazing Saddles

You may recognize some of these celebrities:
Leonardo DiCaprio
Jimmy Fallon
Derek Jeter